Baling twine is a product commonly used by the agriculture industry and is readily available for purchase in farm suppy stores. However, when left in fields after use, it presents a significant threat to wildlife, particularly ospreys. Ospreys are curiously attracted to baling twine as nest material, and as a result many adult ospreys and up to 10% of the springtime chicks become entrapped and killed by hanging or entanglement.

Below is an article/story regarding a very special osprey pair, Stanley and Iris. The article also includes information on the danger of baling twine for these birds. 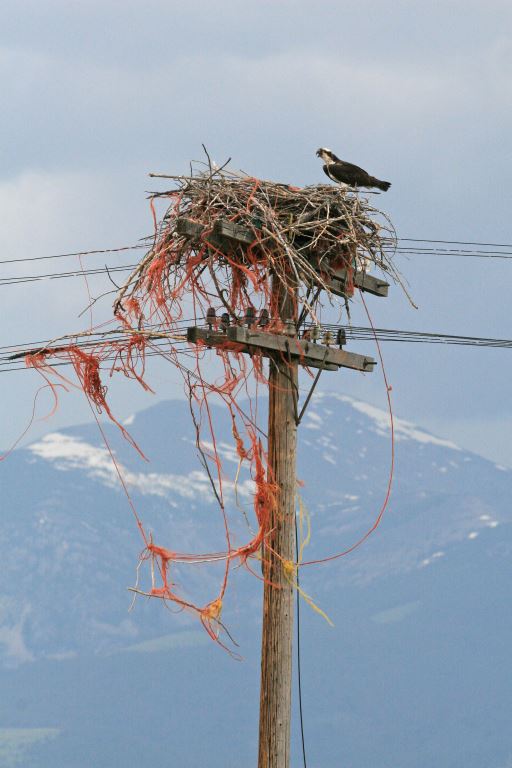 I fell in love with Stanley and Iris a few years ago. It was my first experience with ospreys, albeit via webcam (Montana Osprey Cams, Hellgate Nest) but I was smitten from the beginning. I don’t remember now who introduced me to this pair,  but I do know that no one warned me that even on webcam, they have discernible and fabulous personalities so becoming attached to them is pretty much unavoidable! I understand the arrangement of the food chain, but my aversion to the seeing birds of prey grab beautiful songbirds has historically prevented my love of birds from extending very far into the raptor community. But Iris and Stanley have softened me toward the birds of prey- I have learned not to discriminate.

After a long migration during which they may have flown over a hundred miles a day, ospreys arrive at their nest in early spring, the female of this pair (Iris) usually arriving first by a week or more. While waiting on Stanley to arrive, she starts building a nest on the platform to which she has returned for many consecutive years now.

I once spent almost an entire day intermittently watching the nest in angst because Stanley, a prodigious and reliable fisher for Iris and the family of chicks (named Squish, Hook, and Crown Royal by webcam watchers that year) had “gone missing.”  On the day in question, the youngest, weakest chick (the underdog and therefore my automatic favorite) started to look weak, struggling to hold his head up, because he hadn’t eaten. Panic set in for fear that not only had something devastating happened to the beloved Stanley, but that this poor chick was about to die a slow, miserable death while we helplessly watched.  As it turned out, Stanley was seen by locals (as I recall- some details are sketchy in my mind at this point) fighting off eagles in the area who commonly attack ospreys for their fish.  But Stanley, like a hero in an epic drama, ultimately prevailed and returned to the nest, fish in talons, later that night. Squish and the other chicks thrived throughout the summer and eventually all successfully fledged.  I embraced the relief of a happy ending that year.

There are other dangers lurking in the osprey world, however, that in no way end happily ever after. People familiar with them often know about the natural and eternal conflict between ospreys and eagles. A man-made threat, baling twine, exists -though less well known and far more subtle- with the potential to cause as much or more harm than “eagle wars”.

How much twine is in osprey nests?

Over 1/4 mile of baling twine has been recovered from a single osprey nest blown down in a storm.

How many ospreys are affected?

Many adults and up to 10% of osprey chicks are killed by hanging or entrapment.

How does entrapment occur?

Twine entanglement occurs at least partially due to the ease with which it is caught in the talons of the osprey. Other wildlife such as deer have also been discovered fatally trapped in large amounts of twine.

Baling twine used by farmers to secure hay bales is often made from a bright orange polypropylene material that ends up lying around in fields after removal from the hay.  When the osprey innocently weave their nests using the twine they picked up in fields, they also unknowingly weave a cruel web of death. Death by hanging. Death by entanglement. Death by starvation.

Other ospreys, adults included, have been found hanging dead from the nest by a cord of twine. Even when the twine is not physically binding, it sometimes becomes an electrical hazard as it hangs from nests and crosses power lines causing power outages and possibly ignition of fires (Seacor 173).

Simply scroll past the next section to continue reading about solutions to the problems caused by baling twine left in fields. 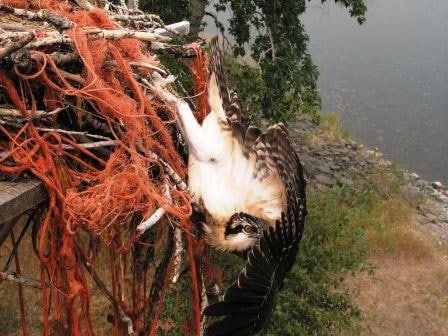 Photo of a baling twine entangled chick hanging from nest

Photo by Beth Waterbury of Idaho Fish and Game. 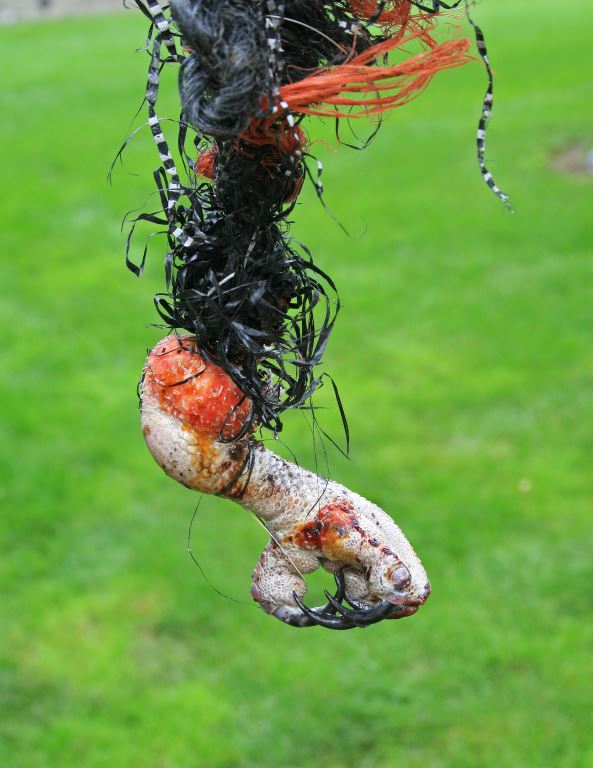 Chicks are found dead or with a leg that has ultimately been severed by the baling twine due to strangulation and lack of circulation caused by the entanglement. 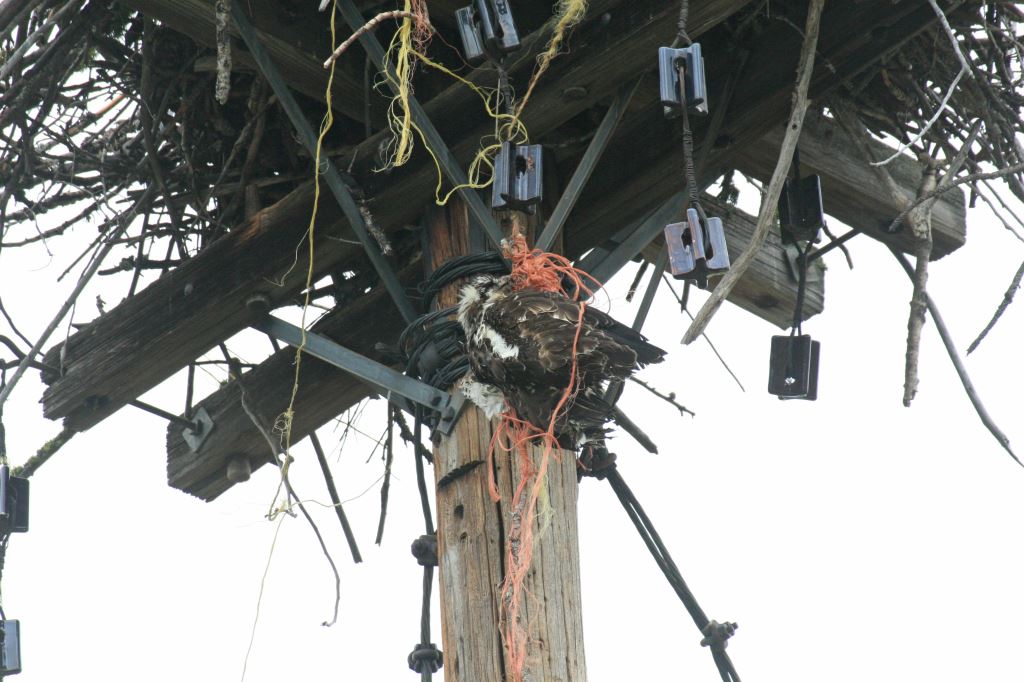 Photo of an adult male osprey hanging dead under the nest where the female incubates eggs. The chicks stand no chance of survival without the male of this osprey pair. 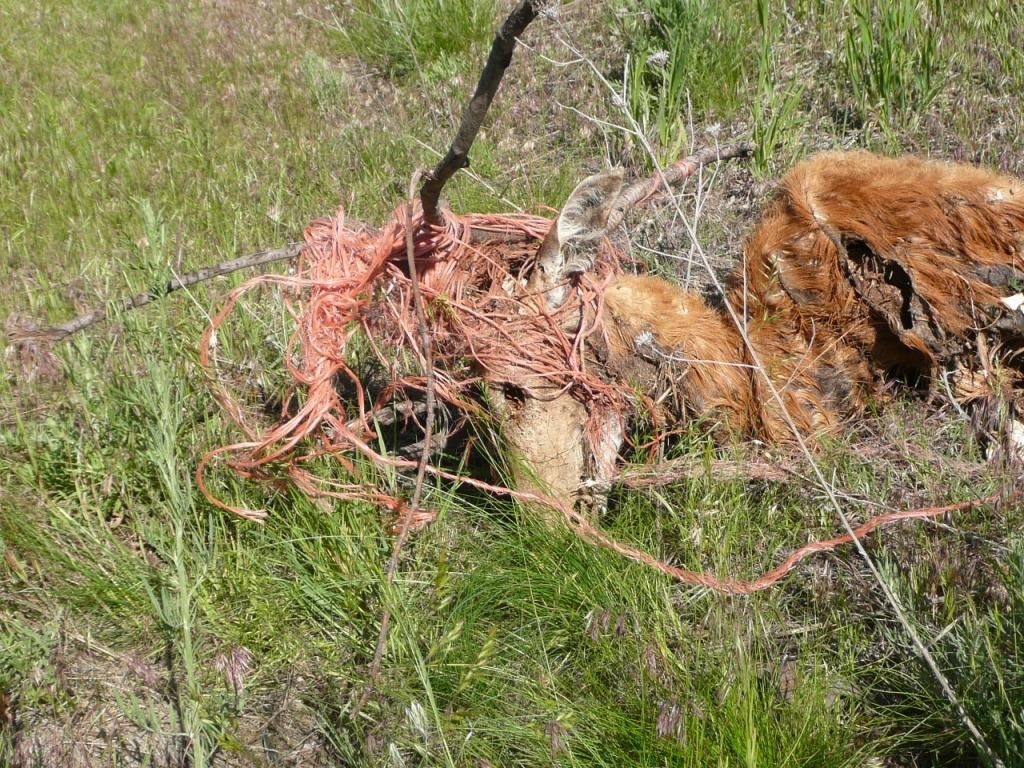 Even deer and other wildlife become entrapped and killed by baling twine.

The agricultural community, although not to blame, needs to be made more aware of this issue. Here are some ideas for tackling this devastating problem: 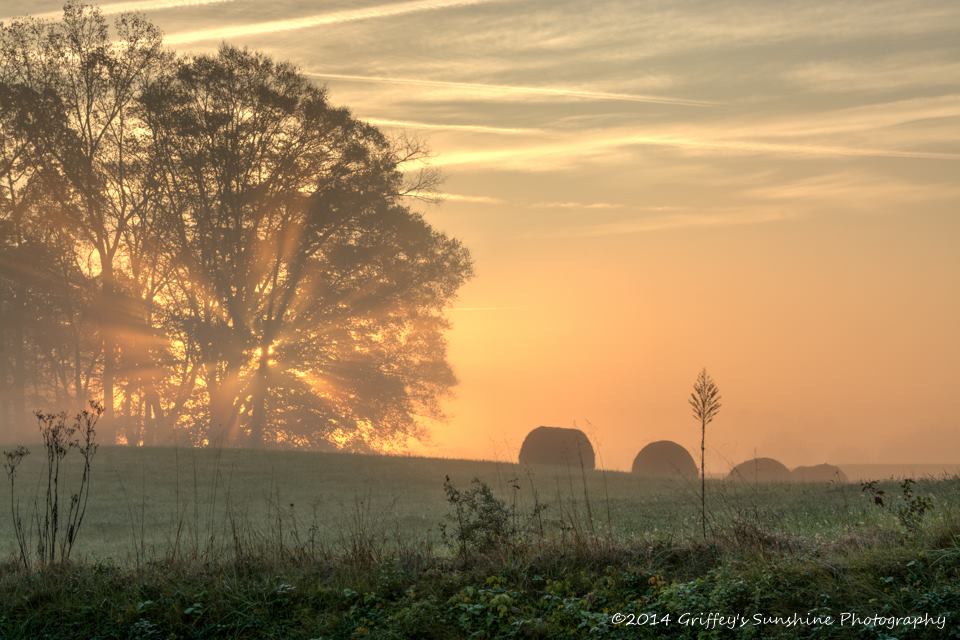 In the end, pondering the wisdom of Dr. Seuss may ultimately lead us to our best solutions- “Unless someone like you cares a whole awful lot, nothing is going to get better. It’s not.”